Stump the Priest: What did Christ write on the ground? 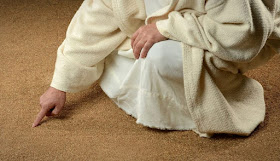 Question: "In John 8:1-11, during the story of the woman caught in adultery, Jesus kneels down to write something in the sand twice, what did he write?"

Of course, the Gospel of John does not say, but some of the Fathers provide some insight on this question. For example, St. Jerome writes: "The Scribes and Pharisees kept accusing her, and kept earnestly pressing the case, for they wished to stone her to death, according to the law. "But Jesus, stooping down, began to write with his finger on the ground," the sins, to be sure, of those who were making the accusation, as well as the sins of all mortal beings, according to what is written in the prophet, "Those who depart from you shall be written in the earth" [Jeremiah 17:13] (Against the Pelagians 2:17).

"Then the legislator of morality and human conduct stooped down, and with his finger wrote on the ground, as though he heard them not (John 8:6). What did the Lord write in the dust? The Evangelist maintains silence concerning this and does not write of it. It was too repulsive and vile to be written in the Book of Joy. However, this has been preserved in our Holy Orthodox tradition, and it is horrible. The Lord wrote something unexpected and startling for the elders, the accusers of the sinful woman. With His finger He disclosed their secret iniquities. For these who point out others’ sins of others were experts in concealing their own sins. But it is pointless to try to hide anything from the eyes of One Who sees all.

“M (eshulam) has stolen treasures from the temple,” wrote the Lord’s finger in the dust.

“A (sher) has committed adultery with his brother’s wife;

“E (led) has struck his own father;

“A (marich) has committed sodomy;

And so one statement after another was written in the dust by the awesome finger of the righteous Judge. And those to whom these words referred, bending down, read what was written, with inexpressible horror. They trembled from fright, and dared not look one another in the eye. They gave no further thought to the sinful woman. They thought only of themselves and of their own death, which was written in the dust. Not a single tongue was able to move, to pronounce that troublesome and evil question, What sayest Thou? The Lord said nothing. That which is so filthy is fit to be written only in filthy dust. Another reason why the Lord wrote on the ground is even greater and more wonderful. That which is written in the dust is easily erased and removed. Christ did not want their sins to be made known to everyone. Had He desired this, He would have announced them before all the people, and would have accused them and had them stoned to death, in accordance with the law. But He, the innocent Lamb of God, did not contemplate revenge or death for those who had prepared for Him a thousand deaths, who desired His death more than everlasting life for themselves. The Lord wanted only to correct them, to make them think of themselves and their own sins. He wanted to remind them that while they carried the burden of their own transgressions, they shouldn’t be strict judges of the transgressions of others. This alone did the Lord desire. And when this was done, the dust was again smoothed over, and that which was written disappeared.

After this our great Lord arose and kindly said to them: He that is without sin among you, let him first cast a stone at her (John 8:7). This was like someone taking away the weapons of his enemies and then saying, Now, shoot! The once haughty judges of the sinful woman now stood disarmed, like criminals before the Judge, speechless and rooted to the ground. But the benevolent Saviour, stooping down again, wrote on the ground (John 8:8). What did He write this time? Perhaps their other secret transgressions, so that they would not open their closed lips for a long time. Or perhaps He wrote what sort of persons the elders and leaders of the people should be like. This is not essential for us to know. The most important thing here is that by His writing in the dust He achieved three results: first, He broke and annihilated the storm which the Jewish elders had raised against Him; second, He aroused their deadened consciences in their hardened souls, if only for a short time; and third, He saved the sinful woman from death. This is apparent from the words of the Gospel: And they [the elders] who heard it, being convicted by their own conscience, went out one by one, beginning at the eldest, even unto the last; and Jesus was left alone, and the woman standing in the midst (John 8:9)" (Pravmir: What Was Christ Writing on the Ground?).