The Colors of the Russian Church 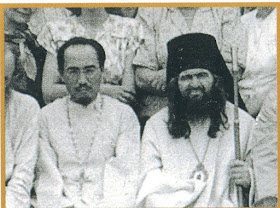 The schismatic priest Matthew Raphael Johnson has posted a podcast (on Radio Aryan, an overtly Neo-Nazi website), which has taken issue with the recent "Statement Concerning the Sin of Racism." I will address his criticism in more detail (along with those of others) in another post, but one thing he asserted is so grossly out of context that I want to deal with it separately. MRJ quoted from "About the Spiritual and Moral Significance of the Russian Orthodox Church Outside of Russia," by St. John John (Maximovitch), and suggested that somehow St. John was affirming the need for races and ethnic groups to remain separate. The translation he quoted from differs somewhat from the translation available online, most significantly, he quoted St. John as speaking of the Russian Church bringing its "color" to decorate the Church, whereas the text online says (quoting the first half of the text in order to provide the context, with the pertinent text highlighted):


"All the parts of the universal Church have one common goal -- the preaching of the word of God, the preparation of people that they might become capable of being members of the Body of Christ and having become such, more and more, more sincerely and strongly would become one with the divine salvific life of the Body of Christ, for in that is the salvation of people.

In the achievement of this common goal every local Church has its significance.
To every people, through God's providence, unique gifts are given.

Every Church fulfills its mission, in keeping with these gifts. For this reason every people, or combination of related peoples, has its own Church, and such a division of ecclesiastical authority furthers the activity of preaching.

For this reason the Orthodox Church allows the establishment of new local Churches and so, new centers of preaching. In this manner arose both the Russian and Slavic Churches.

Thus, every people has its own unique characteristics of the spirit, and this is the basis for the formation of local national Churches.

All of them together comprise One Universal Church and they all bring into it these unique characteristics and gifts, just as good servants bring the fruits of those talents that God has given them. In this manner is formed the pleasing to God amalgamation of spiritual sounds and colors with which the Church that unites all peoples to the glory of God, is decorated.

This beauty the earth brings to heaven as a sweet-smelling censer.

Into this beauty the Russian Church, as well, brings its colors and it sounds: let us compare the severe at times strictness of the righteous ones of the East with the compunctionate spirit of Russian saints.

Being scattered around the whole world, we preserve the expressions of our spirit, which are given to us by God. This calls us to preserve unity with the Church, to which God appointed activity among us, our spiritual nourishment and development, the support of our spiritual zeal, the development of our talents. For this reason, scattered across the entire world, we established our Russian churches and all together we comprise one Russian Church Outside of Russia.

The spiritual manifestations of the Church are the same in all people, but their appearances -- colors and sounds -- are different. The differentiation of ways to serve and spiritual gifts was pleasing to the Creator of all -- God the Savior. We know and sense spiritual benefits and feel joy when we see how different people of different characters and gifts give glory to the one God. For this reason, for example, being led by true ecclesiastical understanding and feeling, the Serbian Church with joy took in the Russian Church, thus giving witness to the spiritual benefits of its existence in its midst."

First off, no one denies that the Orthodox Church consists of local regional Churches, that often correspond to national boundaries -- though this is not always the case. What we do deny is that the Church is divided along strictly ethnic lines. In Russia, you have many ethnicities, but only one Russian Church. Even though there is a Serbian Orthodox Church, when St. John (Maximovitch)'s Serbian ancestors moved to Russia to flee Turkish domination, they did not establish a separate Serbian parallel Jurisdiction in Russia.  Likewise Russians who live in Greece attend the Greek Church there. They have not established a parallel Russian Orthodox Church in Greece.

But more to the point, this is a great example of why Orthodoxy cannot be learned only by reading books. If all that we had of St. John was his writings, one might debate what exactly he meant here, but we can still talk with those who knew St. John, were members of his flock, and know what he thought about these things. I never met St. John myself, but I have had the pleasure of knowing quite a few people who did know him extremely well, and none of these people got the impression that St. John promoted ethnic separation. Let me tell you about some of these people. 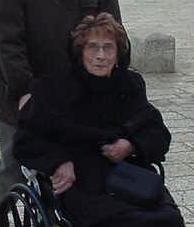 The first such person I met, back in 1992, was Anastasia Titov, who was a Russian from China and had served on St. John's clerical staff in Shanghai. I was a new convert when I met her, as was my wife. We had left an English speaking parish of the Russian Orthodox Church Abroad in Oklahoma City, and found ourselves in a mostly Russian speaking parish here in Houston. It was a difficult adjustment. For the first few months, my wife was in the parish alone while I was staying in upstate New York. She was a stranger in a strange place… not only was she a new convert, but she was from China too (like Anastasia), but was ethnically Chinese (unlike Anastasia), and so felt out of place at first. Anastasia took her under her wing, made her feel at home, and often spoke of the two of them as being Chinese compatriots. Her husband Paul, though also Russian, spoke Chinese very fluently. 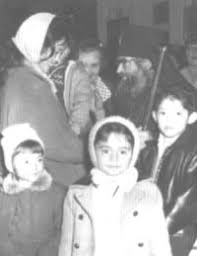 Tamara Zaharek with St. John and her children

The next person I met was Tamara Zaharek, who was one of St. John's orphans that he brought to the United States. I believe her father was Chinese and her mother was Russian. For whatever reason (I don't remember the details) she and her sister ended up as orphans, and St. John was not only her spiritual father, but was very much of a father figure. She wrote a very touching children's book about what it was like to grow up with St. John, entitled Saint John and Goolya. The orphanage had Russian children, Chinese Children, and Children who were both, like Tamara. All of these children were raised together. St. John did not merely tolerate the presence of Chinese children in his orphanage, he brought them into the orphanage himself, if he saw that they had no home. I later went with my wife, and my older daughter (who was 5 months at the time) to attend the glorification of St. John in San Francisco, and got to see the Cathedral and visit with Tamara's extended family. In that cathedral, you see many people who are Chinese or of mixed ancestry. At that time the most senior priest there was Fr. Elia Wen, who was ordained by St. John, and was a revered member of the community there.


Tamara giving a talk about St. John, unfortunately, the sound quality is not very good.

My bishop also knew St. John very well. Among other things, he tells a story about what happened when an American kid in a gym class picked a fight with a Russian boy that was also a member of the Cathedral in San Francisco. To the great confusion of the Americans (especially the coaches), suddenly a bunch of Chinese boys (who were from St. John's orphanage) began shouting in Russian "Ours are being attacked!" and rushed to his defense, and a general melee broke out (See Ancient Faith Radio, Remembrances of St. John of Shanghai, January 2012, beginning at about the 56:30 minute mark). But note what these boys said... "Ours are being attacked!" They were not treated as foreigners, and they thought of their fellow Russian Orthodox friend as being their people.

I asked Vladika Peter if he ever had any sense that St. John did not approve of Russians marrying Chinese people, and he said emphatically, "No" and that it was not an uncommon occurrence. And then told me a story about St. John's successor as Archbishop of San Francisco, Archbishop Anthony (Medvedev). There was a Russian girl who wanted to marry a black man, and her family wanted Archbishop Anthony to forbid it. His only response was, "If he embraces the Orthodox Faith, there is nothing I can do."

I would also note that in Russia, not only do you have many ethnic groups that are all Orthodox and all part of the same Church, but you see such people in Churches all over Russia, and in Russian Churches around the world as well. They are quite at home, and I have never seen any Russian who had a problem with that. Because of geography, you are more likely to see Asian faces in Russian Churches than you are Africans, but you do see them too. In fact, the greatest Russian poet, Alexander Pushkin, had an African great-grandfather, and it showed: 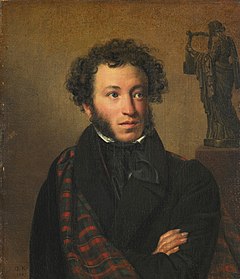 So the colors of the Russian Church are varied, and it is the Faith as expressed in the Russian Orthodox Tradition that unites them into one local Church... not similarity in skin tone.

A Statement Concerning the Sin of Racism